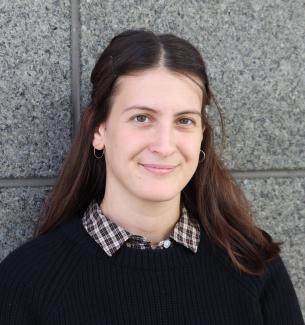 Working to create material change: Q & A with Sophie Hess

Sophie Hess, one of this year’s MCEAS Consortium Dissertation Fellows, studies the ecology of Maryland’s Patapsco River Valley. She spoke with us about her passion for Maryland’s history and her belief that historians can contribute toward social and environmental movements.

Q: What drew you to the study of early America?

Hess: I guess you could say that I meandered my way into early American history! As an undergraduate, I was actually more interested in twentieth-century history, and my capstone project was a study of the domestic violence shelter movement in 1970s Cleveland. I'm originally from the Baltimore region, and after college, I moved back to the city and worked at a women's shelter, thinking I might want to be a social worker.  While living and working in Baltimore as an adult, though, it became increasingly clear to me that the city's geography, laws, and systemic inequities were deeply rooted in its history of slavery. I decided that I wanted to go back to school and specifically study the early history of the region, and to stay local so that I could be close to both the archives and spaces I would research. At the University of Maryland, I've had a lot of wonderful mentors who have encouraged my interests in both early America and its consequences in the present.

Q: How did you become interested in your dissertation topic?

Hess: While in a research seminar in graduate school, I came across one of Benjamin Banneker's almanacs. I was immediately absorbed in Banneker's writing and life, and at one point thought I might write exclusively about him. As I researched, though, I found that Banneker lived in and wrote about a really complicated geographic space within early Maryland, one which was industrializing in the eighteenth century. Right before and during my coursework, the same region, which is known now as Ellicott City, experienced two traumatic floods. Coverage of the floods in local news portrayed these events as highly unusual, but I saw evidence of destructive floods along this river pretty frequently in eighteenth and nineteenth-century newspapers. I think that I was motivated by these contemporary floods, and more generally by the growing severity of the climate crisis, to conduct a granular study of the Patapsco River and the people who lived along it as it industrialized. I wanted to understand both how the environment changed as the result of desires to extract resources in the landscape for profit, and about the people who were caught in this system through both enslavement and other exploitative labor. I also wanted to understand how people experienced and worked within their environment as it changed.

Q: Who is an influential historian/author that the world should know more about?

Hess: Barbara Fields is one of my favorite scholars to read and reread. As a Maryland historian, I particularly love her 1985 book, Slavery and Freedom on the Middle Ground: Maryland during the Nineteenth Century. It’s an excellent social history that interrogates the political and social boundaries of slavery in America, and it's also just a really good piece of writing. I find her work observant, precise, and also deeply psychological, and I often return to it as a reminder of what a good historical argument looks like.

Q: If you could see or visit a particular historical artifact, what would it be and why?

Hess: This is obviously pure fantasy: I wish I could see a photograph (or even a drawing!) of the Patapsco, the river that I study, in the eighteenth century. I know that it looks wildly different now, and I have spent so much time imagining it as it would have looked then, and I just want to know how my image compares. Another fantasy: I love shellfish, and I'd like to eat some eighteenth-century oysters!

Q: What do you see as some of the challenges or opportunities that early Americanists are working on in the 21st century?

Hess: I believe in reparations, and in historical work that can concretely improve the present. I think it's a challenge to keep these things at the center of the work. As early Americanists, we talk a lot about the ways that we got to where we are, and especially in recent years, there has been a lot of initiative around "reckoning" with the past. I think that is important, but I also believe that there has to be action behind it. Early Americanists understand the past in an incredibly detailed, meticulous way, and I believe that evidence should be used in collaboration with social movements to create material change.

Q: What do you find most enjoyable/rewarding about the research process?

Hess: For me, going to the archives is definitely the most special part of being a historian. Especially as an early Americanist, there's something that has always felt very moving to me about sitting with hundreds-of-years-old documents and trying to hear the people behind them.

Q: What are you most looking forward to during your Fellowship at the McNeil Center?

Hess: It's been wonderful to spend the fall getting to know the other fellows here, and to have my brain open a little bit wider with each week's seminar. I'm excited for more of all of this during the year. This is such a special community, and I feel lucky to be able to be a part of it.

Stay tuned for more Fellow Profiles in the coming months.