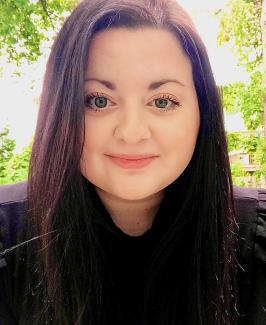 Nicole Skalenko, a graduate student and digital media coordinator at Rutgers University-Camden, took part in a professional experience this summer that helped to shape her career path.

As a participant in the McNeil Center’s C. Dallett Hemphill Summer Internship Program, Skalenko interned with the American Philosophical Society on the public-facing digital archive project called “The Revolutionary City: A Portal to the Nation’s Founding.” The internship afforded her more hands-on experience with public history and digital projects and ultimately inspired her to establish a career in digital humanities.

Currently, in her graduate program at Rutgers, Skalenko studies early American history with concentrations in eighteenth-century print culture and the American Revolution in New York, New Jersey, and Philadelphia. She is also the Digital Media Coordinator at the Mid-Atlantic Regional Center for the Humanities (MARCH) at Rutgers University-Camden and a researcher on a military history project centered around New Jersey campaigns during the American Revolution.

She has worked as a researcher at Kean University for the William Livingston’s World project, where she assisted in building a website centered around eighteenth-century cultural, intellectual, and political aspects of the Livingston and Kean dynasties. Skalenko earned her B.A. in Honors History from Kean University in Union, New Jersey, in May 2020.

We asked Skalenko to reflect on her experience with the summer internship program.

Q: What sparked your interest in the study of early American history?

Skalenko: I grew up in Monmouth County, New Jersey, which certainly played a part in my growing interest in early American history, particularly in the American Revolution. Monmouth County has a rich revolutionary history that is documented through various historical markers. Historic structures dot both the landscapes and busy streets, and the Monmouth Battlefield was the site of one of the largest battles that took place during the War for American Independence.

I consider the time I spent during my undergraduate studies at Kean University to be very significant in sparking my interest in studying the period seriously. As a student in the Department of History at Kean University, I took part in “MakeHistory@Kean: William Livingston’s World,” a National Endowment for the Humanities (NEH) grant-funded research initiative cultivated by History professors Dr. Elizabeth Hyde and Dr. Jonathan Mercantini. The main goal was to have undergraduate students produce original historical research attributed to William Livingston (first elected Governor of New Jersey, August 1776), his family, and constituents while exploring archival resources through the Kean University Special Collections Research Library and Archive and Liberty Hall Museum.

I had the opportunity to work on projects centered on William Livingston’s roles as governor of New Jersey and political propagandist during the American Revolution. I also took part in reconstructing his personal library and compared the contents to other founders’ libraries. That research led me to want to learn about other topics, such as the politics from the period and the influence of print leading up to and during the War for Independence.

Q: Tell us more about the “Revolutionary City” project and your experience of being an intern for it. For instance, what is a “public-facing digital archive,” and what is the APS aiming to do with it? What were your contributions to the project?

Skalenko: “The Revolutionary City: A Portal to the Nation’s Founding” is a public-facing digital archive that was created by the American Philosophical Society (APS), the Historical Society of Pennsylvania (HSP), and The Library Company of Philadelphia (LCP) to make accessible invaluable manuscript material created or received in Philadelphia between 1774 and 1783. Philadelphia encompasses a rich Revolutionary history, and its location played a significant role throughout the eighteenth century. With the forthcoming 250th anniversary of the Declaration of Independence, many people will look to Philadelphia and these documents to better understand our nation’s founding principles and history. The APS, HSP, and LCP will make these documents as accessible as possible to scholars, students, teachers, and those passionate about the period. The project’s larger goals are to offer a bigger picture of the American Revolution by recovering the voices of women and men marginalized in the archival record and telling new narratives that are different from those we already know.

My contributions to the project included transcribing original manuscripts, creating metadata, surveying collections, and digitizing documents. I also had the opportunity to work on a research project where I focused on female camp followers of the Continental Army. Most of my responsibilities centered around transcribing manuscripts and creating metadata for the material. I had the opportunity to transcribe three sets of papers, including Henry Laurens’ correspondence, the papers of James Hutchinson, and Brigadier General George Weedon’s Orderly Book and military correspondence.

All of the collections of papers I worked with were fascinating because I learned diverse stories of the American Revolution through the perspectives of different people. The Henry Laurens papers are housed at the HSP. The specific letters I worked with stemmed from Laurens’s time as a South Carolina delegate and later President of the Continental Congress. James Hutchinson was a Quaker and Surgeon General of the Continental Army. His papers offered key insights on Quaker pacifism during the onset of the American Revolution that was demonstrated in his detailed correspondence with his uncle, Israel Pemberton of Philadelphia, while Hutchinson was abroad in London studying Surgery. I also transcribed General George Weedon’s military correspondence and his orderly book that he kept between August 1777 and May 1778. The orderly book and correspondence documented the Philadelphia Campaign and the grim conditions Washington and the army faced during their winter encampment at Valley Forge. This particular collection served as the inspiration for my research project on the role of female camp followers in the Continental Army.

Additional contributions to the project included surveying collections and creating digital scans of collection material that will be added to the “Rev City” portal in the future. I worked closely with Sabrina Bocanegra, Digitization Archivist, and Bayard Miller, Head of Digital Scholarship & Technology, surveying the Smith-Houston-Morris-Ogden Family Papers to find relevant material for “Rev City.” I had the opportunity to review material that had not been looked at in quite some time. I learned a great deal about creating finding aids and the challenges posed in processing collections. I also assisted in digitizing collection material for the Religious Society of Free Quakers records. This involved assessing the physical condition of materials, scanning, creating metadata, and uploading a digital image to an external hard drive. The digital images will be stored externally until they are moved permanently to the “Rev City” portal.

Q: What was the most valuable or interesting part of your summer internship experience?

Skalenko: There were many valuable and interesting parts of my summer internship experience. One of the most interesting and valuable events I attended was the Open Data: Reuse, Redistribution, and Risk conference hosted by the American Philosophical Society’s Library & Museum. Scholars presented their work on digital humanities projects and discussed the opportunities and challenges that come with open access. There are so many different things to consider when collection material is made available to the public. Community collaborations, sustainability, ethical practices, maintaining the integrity of documents, and language must be considered before, during, and after digitization.

Transcription was also a valuable part of my internship experience. I enjoy transcribing eighteenth-century manuscripts because it helps me connect with the past and engage with the historical actor on a much deeper level. A lot can be said about an individual based on their handwriting style, punctuation, spelling, and, more importantly, the content of their letters that demonstrate what was most important to them at that given time.

One of the most valuable parts of my summer internship at the APS was working closely with Dr. Kyle Roberts. Kyle taught me so much about digital humanities projects and the value of a career in Public History. He also facilitated “Departmental Behind-the-Scenes” meetings, where all of the interns had opportunities to meet and learn from staff across different departments of the APS, such as Conservation, the Center for Digital Scholarship, Museum Education, Scholarly Programs, Cataloguing and Communication/Publications, and the Center for Native American and Indigenous Research. Apart from making my experience at the APS the best it could have been, Kyle also encouraged me to continue my research on female camp followers and the role of women in the Continental Army by suggesting material for me to review in the APS Reading Room. His mentorship was truly invaluable.

Q: How do you think your internship will help you in your graduate studies and beyond?

Skalenko: Before arriving at the APS, I worked at the Special Collections Research Library and Archive at Kean University, where one of my responsibilities was to assist Head Archivist Erin Alghandoor in preparing 4,000 + manuscripts from the Liberty Hall Collection for digitization. I became interested in learning more about digitization, accessibility, and digital humanities projects in general. I was especially intrigued with how the Center for Digital Scholarship at the APS promoted digital humanities initiatives through collaboration and the technology they utilized to create digital scans of material.

Working alongside professionals in the field at the APS offered a unique and fulfilling experience because I had the opportunity to ask questions and gain a hands-on experience on how a digital humanities project is developed in a research library setting. Not only did my summer internship at the APS inspire me to establish a career in digital humanities, but it also provided me with invaluable experience and knowledge on digital projects, metadata, and open data initiatives.

Skalenko: I could not have asked for a better internship experience. Being able to work on a project like “The Revolutionary City,” which aligned so well with both my research and career interests, was an invaluable experience. I look forward to seeing how “Rev City” progresses and how researchers utilize the portal. I cannot thank the McNeil Center for Early American Studies and the American Philosophical Society enough for this phenomenal experience.