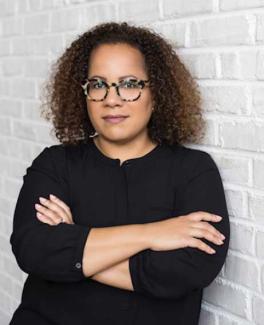 This program is free and open to the public. No registration required.

As we approach the 250th commemoration of the signing of the Declaration of Independence, the United States is still wrestling with the nation's founding principles. Words such as "freedom" and "democracy" are just as charged today as they were more than two centuries ago, and the quest to form a "more perfect union" is far from complete.

For the past twenty years, historian, writer, and producer Erica Armstrong Dunbar has devoted her life to thinking deeply about these issues, and has produced scholarship (both academic and public) to help us make sense of the long arc of history. With each one of her texts or television shows, Dunbar has centered Black women, demonstrating to all that one of the best ways to understand America, both past and present, is to do so through the eyes of Black women. Least protected and often discarded, Black women lived, loved, struggled, prayed, and worked to survive and thrive in a nation that kept them in bondage or living under the oppression of segregation throughout the majority of this nation’s history.

In conversation with Dean John Jackson, Dunbar will discuss the central role played by Black women in the founding of the nation and in their centuries’ long agitation and activism to force the nation to live up to its promises.


More about Erica Armstrong Dunbar:
Erica Armstrong Dunbar is the Charles and Mary Beard Distinguished Professor of History at Rutgers University and serves as the New Brunswick Campus Director of the Institute for the Study of Global Racial Justice. Dunbar also serves as the National Director of the Association of Black Women Historians. Her publications, teaching, and documentary appearances have placed her among a small number of African American women scholars who study Black women’s history up to and beyond the Civil War. Dunbar received her B.A. from the University of Pennsylvania (CAS 1994) and her Ph.D. from Columbia University.

Dunbar’s first book, A Fragile Freedom: African American Women in the Antebellum City was published by Yale University in 2008. Her second book, Never Caught: The Washingtons’ Relentless Pursuit of Their Runaway Slave, Ona Judge, was named a finalist for the National Book Award in Non-Fiction and was a winner of the Frederick Douglass Book Prize. Her third book, She Came to Slay: The Life and Times of Harriet Tubman, her young readers editions, her audio books, and her recent role as a Co-Executive producer on HBO’s THE GILDED AGE, remind us that Dunbar has built a name for herself both inside and outside of the academy.