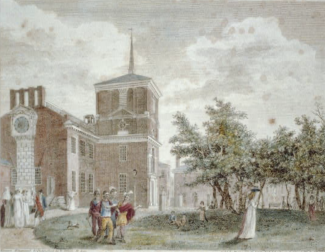 It is easy to think that the climate crisis erupted in the 20th century. But scholars know that its roots lie deeper. Colonists throughout the Americas fantasized about their ability to alter the climate, often through large-scale landscape transformations. The term “Plantationocene” has been proposed to link early modern extractive colonial practices and Atlantic chattel slavery to long-term climate change and ecological crises. Anthracite coal was first mined in Pennsylvania in 1775 and the land use patterns that burned the eastern forests were laid out in the seventeenth century and accelerated in the early nineteenth. The expansion of meat-centric diets began with Iberian forms of livestock raising and butchery developed in early Spanish America’s farms and cities. Climate science likewise has early American roots, emerging alongside global commercial expansion and colonialism in the early modern period. What we now call the “greenhouse effect” was first identified in the 1850s by New York women’s rights activist Eunice Foote. Early American connections can also be found for some of the proposed solutions. Proponents of plans to reflect sunlight back into space have to contend with histories of the destruction wrought in the Western Hemisphere by the volcano Tambora in 1816, the “Year without a Summer”; activists working to fight pipeline expansion on Indigenous land contend with the long history of genocidal treaties and the longer history of Indigenous ecological knowledge; and climate cases in U.S. courts hinge on whether the founders implicitly included a right to a stable climate in their framing of the Constitution.

As scholars of early America, we aim to respond to the current climate crisis and better understand the depth and ramifications of its roots in the early modern era through a workshop dedicated to the topic. Co-organized by the McNeil Center for Early American Studies and the Environmental Historians’ Action Collaborative, we hope to trace these connections and to create resources that historians, literary scholars, and others can use to integrate climate crisis history into their teaching and research.

Toward these ends we seek participants who can creatively and strongly demonstrate the relevance of early American studies to the modern climate crisis. We are particularly interested in scholarship from contingent scholars and scholars from marginalized and underrepresented groups.

Participants will make a short presentation and collaborate in the production of a resource for teaching, scholarship, and activism. We invite proposals from scholars to present aspects of their research projects as well as less conventional contributions including, but not limited to: pedagogical strategies and materials, collaborative projects, and proposals for connecting scholarly efforts to activist movements.

Potential themes include the following, but we also invite creative and novel insights that go beyond them:

• Causes: How can we trace the climate crisis to early America and/or the early modern Atlantic world.

• Precedents: How did different peoples understand and respond to previous moments of climate change and environmental degradation?

• Legacies: How do structures, institutions, and geographies created in early America shape our definition of and responses to the climate crisis today?

• Solutions and Responses: How can studying the past allow us to imagine and enact livable futures?

As we seek to promote modes of scholarly interaction suitable to the climate crisis, this will be a 1-2 day hybrid workshop, with an in-person hub at the McNeil Center and satellite hubs in Europe and at the University of Southern California’s Early Modern Studies Institute to facilitate participation without long-distance travel.

Some funding will be available for the conference. We will prioritize small honorariums for scholars in contingent or temporary positions. Details will be provided to accepted applicants. As we seek to minimize emissions, airfare will not be reimbursed.

Interested scholars should send a 250-word abstract and a copy of their CV to McNeil Center Associate Director Amy Baxter-Bellamy at abaxter@sas.upenn.edu.