The Threshold of Manifest Destiny: Gender and National Expansion in Florida 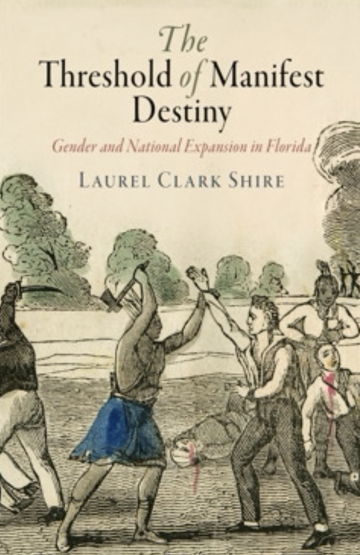 In The Threshold of Manifest Destiny, Laurel Clark Shire illuminates the vital role women played in national expansion and shows how gender ideology was a key mechanism in U.S. settler colonialism.

Among the many contentious frontier zones in nineteenth-century North America, Florida was an early and important borderland where the United States worked out how it would colonize new territories. From 1821, when it acquired Florida from Spain, through the Second Seminole War, and into the 1850s, the federal government relied on women's physical labor to create homes, farms, families, and communities. It also capitalized on the symbolism of white women's presence on the frontier; images of imperiled women presented settlement as the spread of domesticity and civilization and rationalized the violence of territorial expansion as the protection of women and families.

Through careful parsing of previously unexplored military, court, and land records, as well as popular culture sources and native oral tradition, Shire tracks the diverse effects of settler colonialism on free and enslaved blacks and Seminole families. She demonstrates that land-grant policies and innovations in women's property law implemented in Florida had long-lasting effects on American expansion. Ideologically, the frontier in Florida laid the groundwork for Manifest Destiny, while, practically, the Armed Occupation Act of 1842 presaged the Homestead Act.