Slavery's Borderland: Freedom and Bondage Along the Ohio River 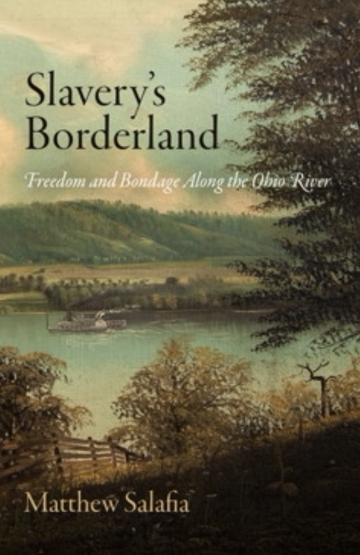 In 1787, the Northwest Ordinance made the Ohio River the dividing line between slavery and freedom in the West, yet in 1861, when the Civil War tore the nation apart, the region failed to split at this seam. In Slavery's Borderland, historian Matthew Salafia shows how the river was both a physical boundary and a unifying economic and cultural force that muddied the distinction between southern and northern forms of labor and politics.

Countering the tendency to emphasize differences between slave and free states, Salafia argues that these systems of labor were not so much separated by a river as much as they evolved along a continuum shaped by life along a river. In this borderland region, where both free and enslaved residents regularly crossed the physical divide between Ohio, Indiana, and Kentucky, slavery and free labor shared as many similarities as differences. As the conflict between North and South intensified, regional commonality transcended political differences. Enslaved and free African Americans came to reject the legitimacy of the river border even as they were unable to escape its influence. In contrast, the majority of white residents on both sides remained firmly committed to maintaining the river border because they believed it best protected their freedom. Thus, when war broke out, Kentucky did not secede with the Confederacy; rather, the river became the seam that held the region together.

By focusing on the Ohio River as an artery of commerce and movement, Salafia draws the northern and southern banks of the river into the same narrative and sheds light on constructions of labor, economy, and race on the eve of the Civil War.

Matthew Salafia is coordinator of the University Honors Program and teaches at North Dakota State University.