Printers and Men of Capital: Philadelphia Book Publishers in the New Republic 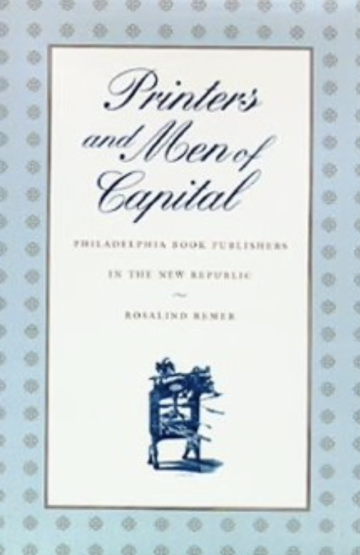 An important phase in the American book trade's shift from colonial craft work to nineteenth-century big business took place in the early national period, as printers began to take on the risks of book publishing by creating and serving new markets. The focus of Printers and Men of Capital is a group of late eighteenth-century printers in Philadelphia who came of age during the years of the Revolution. While the new nation was being formed and defined, these men were seeking to build a publishing industry and establish themselves in their trade. In the 1780s and 1790s, men like Benjamin Franklin Bache and William Duane evolved from printing craftsmen to activist newspaper publishers. Other printers, including Mathew Carey, Thomas Dobson, and William Woodward, turned their sights on book publishing.

Rosalind Remer focuses on the risk-taking strategies of these latter entrepreneurs and on the younger firms that learned from them. She shows how they combined many traditional eighteenth-century forms of business organization with newer methods of financing, sales, and distribution. Making use of the publishers' business records and correspondence, as well as the books they produced, Printers and Men of Capital makes a genuine contribution to our understanding of the development of a domestic economy and culture.

Rosalind Remer is Associate Professor of History at Moravian College.