One Family Under God: Love, Belonging, and Authority in Early Transatlantic Methodism 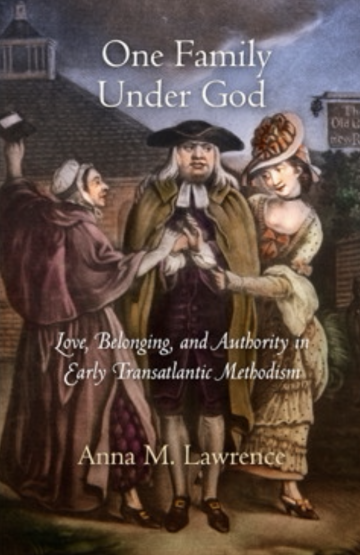 Originally a sect within the Anglican church, Methodism blossomed into a dominant mainstream religion in America during the nineteenth century. At the beginning, though, Methodists constituted a dissenting religious group whose ideas about sexuality, marriage, and family were very different from those of their contemporaries.

Focusing on the Methodist notion of family that cut across biological ties, One Family Under God speaks to historical debates over the meaning of family and how the nuclear family model developed over the eighteenth century. Historian Anna M. Lawrence demonstrates that Methodists adopted flexible definitions of affection and allegiance and emphasized extended communal associations that enabled them to incorporate people outside the traditional boundaries of family. They used the language of romantic, ecstatic love to describe their religious feelings and the language of the nuclear family to describe their bonds to one another. In this way, early Methodism provides a useful lens for exploring eighteenth-century modes of family, love, and authority, as Methodists grappled with the limits of familial and social authority in their extended religious family.

Methodists also married and formed conjugal families within this larger spiritual framework. Evangelical modes of marriage called for careful, slow courtships, and often marriages happened later in life and produced fewer children. Religious views of the family offered alternatives to traditional coupling and marriage—through celibacy, spiritual service, and the idea of finding one's true spiritual match, which both challenged the role of parental authority within marriage-making and accelerated the turn within the larger society toward romantic marriage.

By examining the language and practice of evangelical sexuality and family, One Family Under God highlights how the Methodist movement in the eighteenth century was central to the rise of romantic marriage and the formation of the modern family.