Capitalism by Gaslight: Illuminating the Economy of Nineteenth-Century America 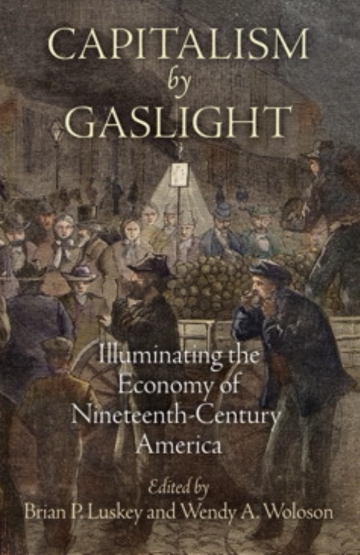 Edited by Brian P. Luskey and Wendy A. Woloson

While elite merchants, financiers, shopkeepers, and customers were the most visible producers, consumers, and distributors of goods and capital in the nineteenth century, they were certainly not alone in shaping the economy. Lurking in the shadows of capitalism's past are those who made markets by navigating a range of new financial instruments, information systems, and modes of transactions: prostitutes, dealers in used goods, mock auctioneers, illegal slavers, traffickers in stolen horses, emigrant runners, pilfering dock workers, and other ordinary people who, through their transactions and lives, helped to make capitalism as much as it made them.

Capitalism by Gaslight illuminates American economic history by emphasizing the significance of these markets and the cultural debates they provoked. These essays reveal that the rules of economic engagement were still being established in the nineteenth century: delineations between legal and illegal, moral and immoral, acceptable and unsuitable were far from clear. The contributors examine the fluid mobility and unstable value of people and goods, the shifting geographies and structures of commercial institutions, the blurred boundaries between legitimate and illegitimate economic activity, and the daily lives of men and women who participated creatively—and often subversively—in American commerce.

With subjects ranging from women's studies and African American history to material and consumer culture, this compelling volume illustrates that when hidden forms of commerce are brought to light, they can become flashpoints revealing the tensions, fissures, and inequities inherent in capitalism itself.

Brian P. Luskey teaches history at West Virginia University. He is author of On the Make: Clerks and the Quest for Capital in Nineteenth-Century America.

Wendy A. Woloson teaches history at Rutgers University-Camden. She is the author of In Hock: Pawning in America from Independence Through the Great Depression and Refined Tastes: Sugar, Confectionery, and Consumers in Nineteenth-Century American Culture.